What does this have to do with real estate? Absolutely nothing! I just thought it would be fun to show you some of the scary places a pilot must land.

SmarterTravel, one of the largest online travel resources of independent expert advice for the budget conscious traveler, has released its list of the World’s Scariest Airports for take-off and landing. “Naturally there are numerous safety regulations in place to ensure these commercial airports remain perfectly safe,” said Anne Banas, executive editor of SmarterTravel. “However, in my personal experience and from talking with several pilots we interviewed, these airports top the list of scariest take-offs and landings with mountains that appear out of nowhere, volcanoes and very low visibility – among others. If you’re looking for a rush, you are sure to get one.”

Barra Airport is one of the world’s most spectacular and beautiful airports, located on the hebridean island of Barra. The airport is actually a beach, in fact, it’s the only airport in the world where scheduled flights take-off and land on a beach. That is, provided the airport’s three runways are not submerged at high-tide. This wide shallow bay of Traigh Mhor, near Barra’s northern tip, was once famous primarily for its cockles until aircraft started to use the beach in 1933.

The beach is set out with three runways, marked by wooden poles at their ends. This allows the Twin Otters that serve the airport to almost always land into the wind. At high tide these runways are under the sea and flight times has to be regularly rescheduled with the tide. If emergency night landing is required vehicle lights are used to illuminate the runway and reflective strips laid on to the beach.

Highlight: It’s always a beach landing and runways form when the tide goes out.

Gibraltar Airport or North Front Airport is a civilian airport that serves the British overseas territory of Gibraltar, a tiny peninsula with an area of only 6.8 square kilometers. The lack of flat space on Gibraltar means the peninsula’s only runway is bisected by its busiest road, the Winston Churchill Avenue that heads towards the land border with Spain. A pair of flimsy-looking barriers closes vehicular traffic every time a plane lands or departs. Fortunately, it’s not a busy airport. It handles only about 30 flights a week, all flying to and from the United Kingdom.

Highlight: The main road to Spain intersects the runway. 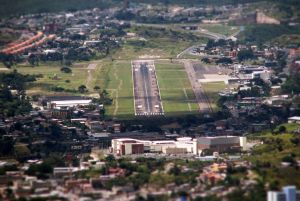 Three thousand three hundred feet above sea level, Toncontín International Airport boasts a short (6,132-foot) runway. Due to the surrounding mountains, the approach resembles a zigzag. A pilot explains: “With the advent of GPS, the approach into Tegucigalpa is no longer straight. We weave between the mountains as we land.” To line up with the runway, planes must make a last-second 45-degree turn. Talk about sweaty palms!

Highlight: A 45-degree bank and quick drop in altitude.

4. Nantucket Memorial Airport, Nantucket, Massachusetts
There once was a man from Nantucket
Who couldn’t see the runway but said “fake it”
The fog was insane
But he had to land the plane
So he used only the instruments and lucked it

Passengers flying to this remote region may  have to take something to steady their nerves. The tiny airport nestled among the steep mountains of the Himalayas is said to be the most dangerous in the  world.

Paro Airport in Bhutan is 1.5 miles above sea  level and surrounded by sharp peaks of up to 18,000ft tall. So treacherous is the landing that only  eight pilots in the world are qualified to land here. Until July 2011,  just  one airline, Druk Air, was allowed to use the facility. The runway is just 6,500 feet long – one of  the few in the world shorter than their elevation above sea level. Planes have to weave through the dozens of  houses that are scattered  across the mountainside – coming within feet of  clipping the roofs.

Highlight: Mountainous terrain means every flight is an aeronautical feat.

Surrounding mountains, a high altitude, an active volcano, and a steep drop at the end of the runway make flying into La Aurora International Airport in Guatemala City a scary ride, even from a pilot’s point of view.

Highlight: A startling approach weaves through volcanoes and mountains.

Highlight: Located on a flattened mountaintop, so overshooting the runway means dropping over a cliff.

The main, 7,000-foot runways at New York’s LaGuardia Airport were extended back in 1967—over water. In case gliding over Flushing and Bowery bays isn’t enough of a thrill, pilots have to avoid interfering with flights from two other extremely busy airports nearby: JFK and Newark. Plus, the airport is located a mere eight miles from Midtown Manhattan, sometimes creating the illusion that the plane is skimming rooftops.

Highlight: Crowded airspace (JFK/Newark are nearby) and main runways extend over water.

9. Wellington International Airport, Wellington, New Zealand
With a single, short, 6,351-foot runway that appears to begin and end in crystal blue waters, it’s easy to see why flying into Wellington may make you uneasy. The winds are so strong coming into this airport that approaching planes wobble and often land at an angle. 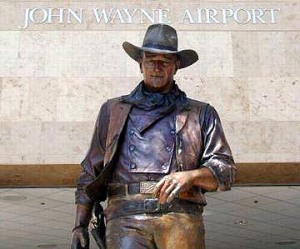 Strict noise reduction requirements may not seem scary at first, but if you’re not expecting engine cutbacks during takeoff you might be spooked. The main runway, at 5,701 feet, is one of the shortest of any major airport in the United States. The short runway, coupled with local noise restrictions, requires a takeoff at or near full power, followed by a steep climb, a sudden reduction in power, and two turns closely following the Upper Newport Bay. A pilot holds brakes, hits engines at full throttle, climbs steeply and cuts engines right at freeway, causing the plane to drop like a roller coaster.